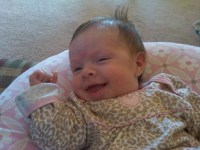 Ivy Caroline Thomas was born on September 28th, 2010 at Spartanburg Regional. She weighed 5 lbs. 12 oz. Usually babies have their first BM within the first 24 hours of life. Ivy still had not had one after 48 hours. Her abdomen became distended and she was not able to keep anything down. On September 30th, she was admitted to the NICU with intestinal complications. Ivy underwent numerous x-rays and procedures. She started to show some improvement and was released after 10 days. However, after she arrived home, she failed to gain weight. She then received her newborn screening results which indicated Cystic Fibrosis (C.F.). The family was referred them to a C.F. specialist in Greenville and a sweat test was ordered. On November 4th, she was officially diagnosed with Cystic Fibrosis.

C.F. is a genetic disease that causes thick sticky mucus to build up in the lungs and digestive tract. This mucus prevents necessary enzymes from making it from your pancreas to your stomach to break down food. Therefore, Ivy requires enzymes prior to every meal. The mucus can also lead to lung infections, which can sometimes lead to the need for a lung transplant. Ivy needs multiple breathing treatments a day to help clear the mucus and keep her lungs healthy.

There is no cure for C.F. The average life expectancy is 37 years of age. C.F. is not the death sentence it once was, as children diagnosed years ago didn’t survive past grade school. Great strides in medicine have been made over the years, and we hope and pray that C.F. will soon stand for “CURE FOUND” instead of Cystic Fibrosis!

Read more about Ivy on her Facebook page here.